Home » Choiza & Sulli spotted on a public date once again Choiza & Sulli spotted on a public date once again 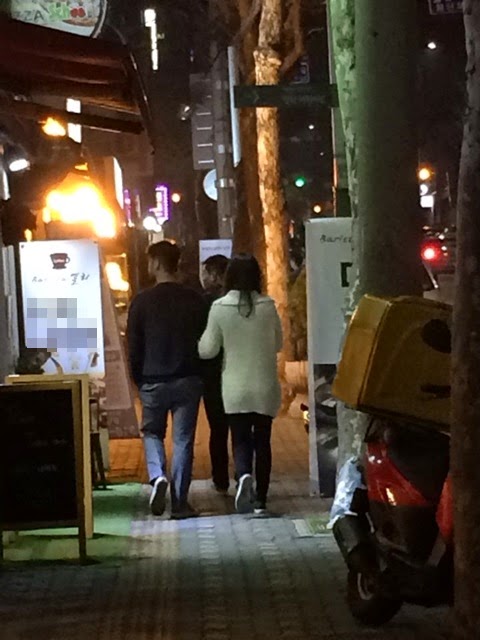 The good thing perhaps of publicizing relationship among celebrity is that they don’t have to hide it anymore?

Well, that might work on Choiza&Sulli couple who was spotted having a late night date since the two admitted their relationship August last year. It seems like the lovely couple showed no sign of unchanging affection towards each other.

According to YTN’s report on April 16, girl group f(x)’s Sulli and Dynamic Duo’s Choiza went out on a date at night around Yongsan area in Seoul.

The couple’s street date was spotted on April 15 and a photo was revealed online.

A photo of Choiza and Sulli was posted showing the two strolling around somewhere in Huam-dong, Yongsan-gu, Seoul last night with an acquaintance. Both were having a comfortable date as Sulli is seen clinging to Choiza’s arms from behind. They seemed to be not anxious anymore because Choiza and Sulli were not trying to cover their faces.

Last March 5, Dynamic Duo’s Choiza and f(x)‘s Sulli were also spotted on a date in Cheongdamdong, Seoul. A Japanese restaurant posted photos of Choiza and Sulli on Instagram, letting those who’d like to know that the two are likely still together.

Meanwhile, Sulli had given fans happy news when she first appeared in ‘High Cut’ a few weeks ago, after a long hiatus, and now she’s already back with another photospread for the magazine!

And yesterday morning, Sulli just arrived from her Bali photoshoot and appeared very bright and lovely at the airport upon her arrival.

At this rate, maybe we’ll soon hear about new projects from her with f(x) as well?